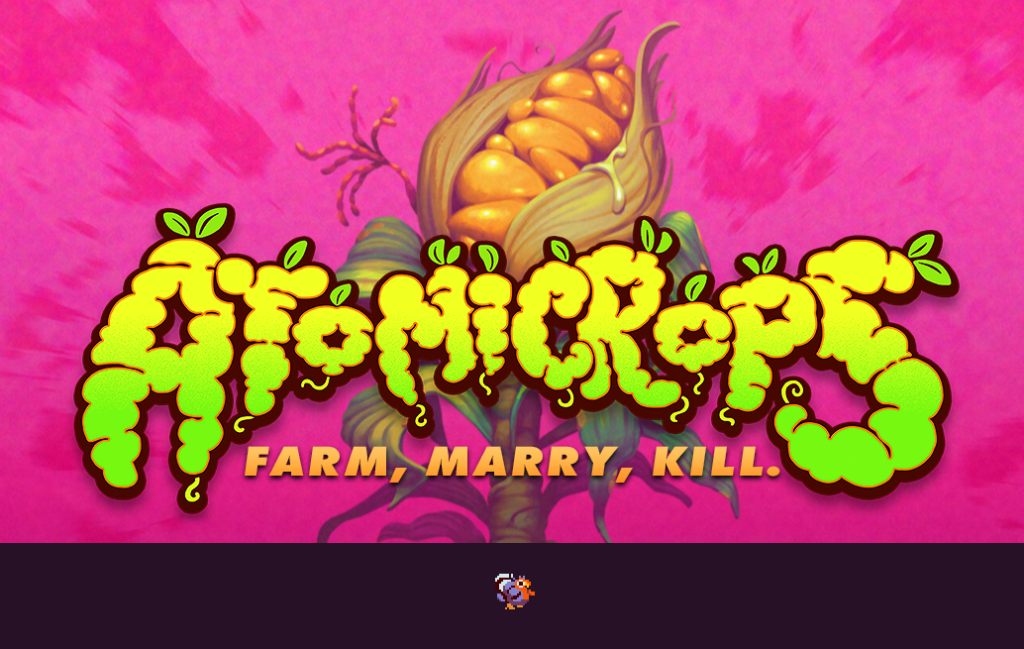 There are some strange genre mixes in video games already. Creating something new is difficult. Atomicrops has succeeded and combines farming with action.

The game by developer Raw Fury brings together two genres that are otherwise rarely associated. It combines a farming simulation with a rogue-like one. You take control of a farmer who has made it her business in a post-apocalyptic world to provide a nearby village with food. As expected, the nuclear catastrophe that afflicts the game at the beginning has left its mark. This has both advantages and disadvantages. The advantage is that the irradiated vegetables grow and thrive at breakneck speed. The disadvantage is that the fauna, which has also mutated, has lost all fear of humans and storms the fields at night. In addition to agricultural work, your main task is therefore to defend your pumpkins, potatoes and corn on the cob against the approaching waves of opponents.

Atomicrops is a 2D twin stick shooter with rogue-like elements, in which you have to keep an eye on field work in addition to the shooter passages. Sounds stressful? It is. The indie game introduces us to the game world with one of the most wonderful intros of this year. The one-minute cartoon shows a town boy taking over his late uncle’s farm. Completely overwhelmed by the huge cowshed, the lush corn plants and the potato patch, everything looks like a generic farming simulator.

First of all: Atomicrops is a rogue-like with permadeath. Means that in each round of the game you have to win everything from the beginning. There are no save points. Deep underground, in the nuclear bunker, a small village has been founded that you have to feed from now on.

Due to the crazy scenario and the daring mix of game elements, Atomicrops actually had the potential to tell an amusing story and shed light on its own world. Unfortunately, the game does not take advantage of this potential in any way. The world of Atimicrops remains – apart from the beautiful pixel graphics – largely cold.

There are no interesting characters, no mystery to be solved and, beyond the actual game task, also no greater opportunities for interaction with the world and its inhabitants. The interaction with the villagers is essentially limited to buying items from them. These include randomly compiled weapons, pickaxes and repair kits for bridges, with which you can unlock new parts of the game world.

There is also the possibility of flirting with some characters by giving them one or more roses. You must first plant the roses, like your vegetables, and make sure that they are not eaten. The opportunity to marry a partner advertised by the game itself turns out to be only superficially packaged game mechanics. In short, the various possible partners offer you bonuses that you can unlock with your roses. This can be, for example, additional lives or increased running speed.

If the world doesn’t really know how to convince, the question remains whether the combination of farming simulation and rogue-like can turn things around.

A round in Atomicrops goes something like this: You start with a small field centrally located on the map and a handful of vegetable seeds that you have to plant. To do this, you must first cultivate the field, then plant the seeds and finally water it. When you’ve done that, you move out to find additional seeds or items in the area that will give you an advantage over your opponents. The map is teeming with mutated rabbits and bulls gone wild that are after you. The fights with the animal opponents play like a conventional twin stick shooter.

In broad daylight you can theoretically devote yourself to planting and watering, but at night it is wild. Then you will be attacked by mutated creatures from all directions.

Defeat them so that your crops are not destroyed. You always have to dare the balancing act and shoot the hordes of opponents away in Twinstick Shooter Marnier and at the same time take care of the field in order to generate points.

The clue of it all: time is ticking against you. The indie game is divided into phases. You start in the spring by day and within a few minutes you have to sow your first seeds and go out to find more seeds or perks that are useful to you in the game.

After a few minutes night falls, which is why you should then be back at your field to defend it from waves of attack. After each season there are also boss fights with huge snails, rabbits or porters, which make life difficult for you with particularly violent attacks.

When you have fended off the waves of enemies that come in one after the other, you will be picked up by a helicopter on dawning morning that will bring you back to the village, where the cycle of upgrades already described takes its course. You then return to the field to plant more vegetables. As befits a rogue-like, you keep doing this until you die. Your total number of points, which is based on the opponents killed and the plants saved, then gives you information about how successful your round was.

This process sounds like an exciting combination of different game mechanics at first. Unfortunately, Atomicrops does not manage to combine these into a coherent overall package. The two main elements – farming simulation and twin stick battles – are implemented much better by other representatives of the genre. Since the possibilities to expand your own farm are very limited, there is no motivational factor to deal with the development of your own vegetable economy in the long term. The battles, on the other hand, are relatively solid, but do not offer any significant added value compared to other games.

From an audiovisual point of view, Atomicrops makes a solid impression. The game benefits from the charm of the pixel optics and manages to accompany the action with coherent melodies and sound effects. The different areas that you can enter during the game each have their own melodies, which are based on the topics of the sections. Overall, the design of the game leaves the best impression.

Atomicrops is a real stress title. The developers of Bird Bath Games have created a real doggie feast for genre lovers. With its interesting genre mix of shooter, farming and rogue-like, there is at least nothing comparable on the market. In any case, that should be given high credit to the team.

The shooter passages in the beautifully designed 2D world are fun and yet extremely demanding. Together with the additional farming stress, sowing seeds, removing weeds and harvesting results in a coherent overall concept. The boss fights, all of which are very successful, act as the cherry on the cake.