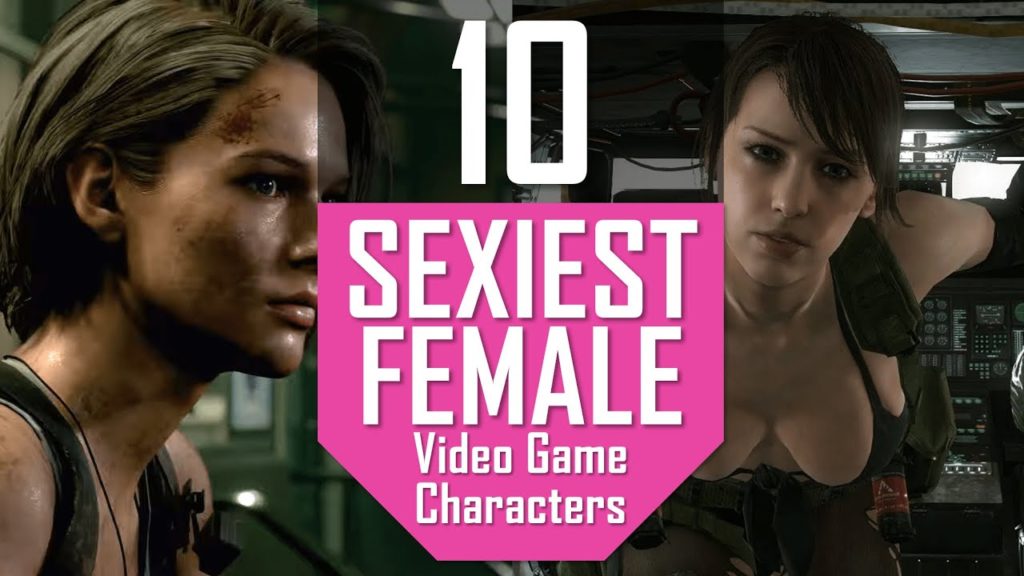 Throughout the years of gaming, generations of players have enjoyed an enormous amount of attractive and sexy characters that can stick with us throughout playing the game and even far beyond that. Are you wondering who are the TOP10 Hottest Video Game Characters....watch this compilation of sexiest female characters in video game history.

Sylvanas Windrunner is one of the Horde's most controversial figures in the World of Warcraft: a mysterious leader who makes her comrades shudder in equal parts with horror and awe. Sylvanas was once the ranger-general of Silvermoon and was in command of the defense of the elven kingdom of Quel'Thalas. Her skills as a leader were tested when the Lich King's undead Scourge attacked her home. Though Sylvanas fought valiantly, she succumbed to the onslaught of the unholy invaders. The death knight Arthas Menethil snatched her soul from the ranger and turned her into a banshee, a vengeful phantom devoted to the Lich King.

Miranda Lawson is a senior officer with Cerberus. She is one of the closest collaborators of the stranger, who is assigned the most critical and dangerous tasks and leads the Lazarus cell with the task of monitoring Commander Shepard. She is a talented biotic, has a lot of tactical combat experience and is also excellent at analyzing and evaluating situations.

Sarah Louise Kerrigan, the self-proclaimed Queen of Blades, is another main character in the series and largely takes on the role of the antagonist. Their backstory was developed by Chris Metzen and James Phinney, with Metzen also responsible for the graphic representation of the character. Glynnis Talken Campbell voiced Kerrigan in the setting of StarCraft and Brood War. In the latest part of the StarCraft II: Wings of Liberty series, Tricia Helfer takes on the part.

Originally, Kerrigan is a 26-year-old woman with psionic skills and extensive training as a spy and assassin. She is also the deputy of rebel leader Arcturus Mengsk, who betrays her. This leads to the fact that she is kidnapped by the zerg and transformed by them into a hybrid of human and zerg. Kerrigan becomes the main fighter of the zerg, but is initially still under the control of the Overmind. After his death, however, she is free and becomes the new leader of the zerg, with whose help she tries to gain dominance over the Koprulu sector.

Her life before the zerg infestation is depicted in the novels Uprising and Liberty's Crusade, while Queen of Blades describes the time after the infection. For a character in a computer game, Kerrigan has remarkable depth and credibility.

Bayonetta (real name Cereza) is the eponymous main character of the Bayonetta series. She is a coquettish and mysterious Umbra Witch. Considered the black sheep of the Umbra Witches due to her Umbran and Lumen descent, which breaks both respective clans' sacred tenents, she possesses a remarkable talent for Bullet Arts and possessed the Left Eye of Darkness.

In the first game, she was sealed away five hundred years ago until she was later found and awakened. Spending twenty years with amnesia, she battles against the angelic hordes of Paradiso and fights to end the malicious plans of the last of the Lumen Sages, Balder.

Months after, Bayonetta, in the second game, finds her friend and fellow clans member Jeanne taken down to the realm of Inferno after a summon gone wrong. With the help of Rodin, she is not only hounded by angels but even demons and uncovers a deeper plot of a former half of a god conspiring to reclaim his lost power and the truth behind the Witch Hunts.

As the main protagonist, she is playable in both Bayonetta and Bayonetta 2 as well as Tag Climax. She is set to appear as a playable character in Bayonetta 3.

Lara Croft is the protagonist of the Tomb Raider series as well as the accompanying films, books and comics. She is aristocratic, but does not live in the noble style, but is an archaeologist. She is often looking for various artifacts, such as the Scion in Tomb Raider I or the hammer of the god of thunder Thor in Tomb Raider: Underworld.

Lara Croft - archaeologist, adventurer, explorer and action star At the very beginning was "Laura Cruise". That was the original name of a new computer game that developed into one of the best-selling game series. Today is Laura Lara, Cruise became Croft. She has remained the sexy, intelligent and daring adventure heroine.

Everything started on the PC. An English company had the brilliant idea of developing a computer game that was like a film. It should be a mixture of action and puzzle solving, and it should be playable from the perspective of a third person. At that time, the cinemas were full of muscle-bound heroes like Arnold Schwarzenegger or Sylvester Stallone, so they decided on something new: a woman as the central character. Someone who arouses sympathy, captivates the player and gives the feeling that you have to protect the character.

Yennefer von Vengerberg (born at Belleteyn in 1173) is a sorceress who lived in Vengerberg, the capital of Aedirn. Yennefer was a student of the sorceress Tissaia de Vries and the youngest member of the council of magicians and later briefly a member of the lodge of sorceresses, leaving the meeting illegally by teleport to find Ciri. As a result, she fell out of favor with many of the lodge members. Yennefer was the lover of the witcher Geralt of Rivia and through his "last wish" the fates of the two were forever linked. After initial problems, Yennefer became a mother figure for Ciri.

The sorceress from Vengerberg is famous for her beauty, even though she was 94 years old at the time of the Swallow Tower. She uses the scent of lilac and gooseberry as a perfume, which Geralt was very fond of. She has inherited elven blood from her mother and was therefore a quarter elf. She is described as not particularly tall, with violet-blue eyes and the body of a twenty-year-old. Her clothes are always black and white, but she also likes to wear clothes made of luxurious materials, such as shoes made of basilisk leather.

The protagonist is YorHa Model B No. 2, or "2B" for short, a female soldier as a female android of the YorHa (also "YoRHa"), whose main characteristics are calm and serenity. It is accompanied by "9S" (YorHa Model S No. 9), an enlightenment android, which shows more feelings than other units. The two are watched by “A2” (YorHa Model A No. 2), an outdated prototype android of the B-line with a silent personality who often decides to act alone.

Jill Valentine is one of the main characters in the Resident Evil series and has appeared in several parts as well as in some life-action films, although this character has nothing to do with the one from the game. She is one of the eleven founding members of the BSAA and until her accident / disappearance in 2005 she was Fields Agent of the BSAA and partner of Chris Redfield, who, like Jill, worked for the S.T.A.R.S. until 1998. Alpha team did its job.
The "Resident Evil" fans have already wondered about the new character design after the unveiling of Jill Valentine from the remake "Resident Evil 3".

Producer Peter Fabiano:
“When we dealt with Jill; if you look at the original, we had to do what we needed to make it stand out. But in this game everything is on a photorealistic level; it's more of a believable atmosphere we're trying to create. We want to have a Jill who fits in, but who is still true to her original personality and essence. And that's how we really came to the new Jill. "

Tifa Lockhart is a fictional character in Square's (now Square Enix) role-playing video game Final Fantasy VII. Created and designed by Tetsuya Nomura, she has since appeared in the fighting game Ehrgeiz and made cameo appearances in several other titles, as well as the CGI film sequel to Final Fantasy VII, Advent Children and related games and media in the Compilation of Final Fantasy VII series.

Designed by Tetsuya Nomura, Tifa was not present in early versions of Final Fantasy VII, as initially, the game was to have only three playable characters. Nomura describes Tifa's character in Advent Children as having several dimensions, calling her "like a mother, a sweetheart, and a close ally in battle" and "remarkably strong, not only emotionally, but physically as well."

Initially, Nomura had difficulty deciding whether to go with a miniskirt or long pants. Seeking input, he passed his sketches around Square's offices, and the majority of the staff members approved of the miniskirt design. The attire was explained in respect to the game as giving her freedom of movement, due to her affinity with hand-to-hand combat, and the skirt, referred to as "quite short [...] giving a considerable degree of exposure," was kept as a staple of her alternate costumes. The developers additionally noted that due to her figure, her otherwise plain garments took on a pleasant appearance.

Quiet was a "silent" sniper and assassin and was active during the 1980s. She was hired by the XOF, a unit commanded by "Cipher", to kill Venom Snake. She had also carried out the assassination attempt on the chief doctor and the nurse. In a conversation one learns that she spoke to her client and said that she has not yet killed her target. While trying to kill Ahab (Venom Snake), Ishmael prevented her, threw ethanol at her and set her on fire, whereupon she fell out of the window with fatal consequences. In addition, she has special abilities like the "Skulls". It is very resilient and like the "Skulls" can move extremely quickly. She carries a parasite that will kill her when she starts speaking English, which she ended up doing to save Venom 'Punished' Snake, when he was bitten by a poisonous cobra. She spoke to Pequod, the pilot of the helicopter and activated the speech parasite. But she could speak one language, namely Navajo. That was the only language the parasites didn't work in. Then she disappeared into the desert and surrendered to her fate.