Best Digital BOARD Games | TOP10 Board Games for PC 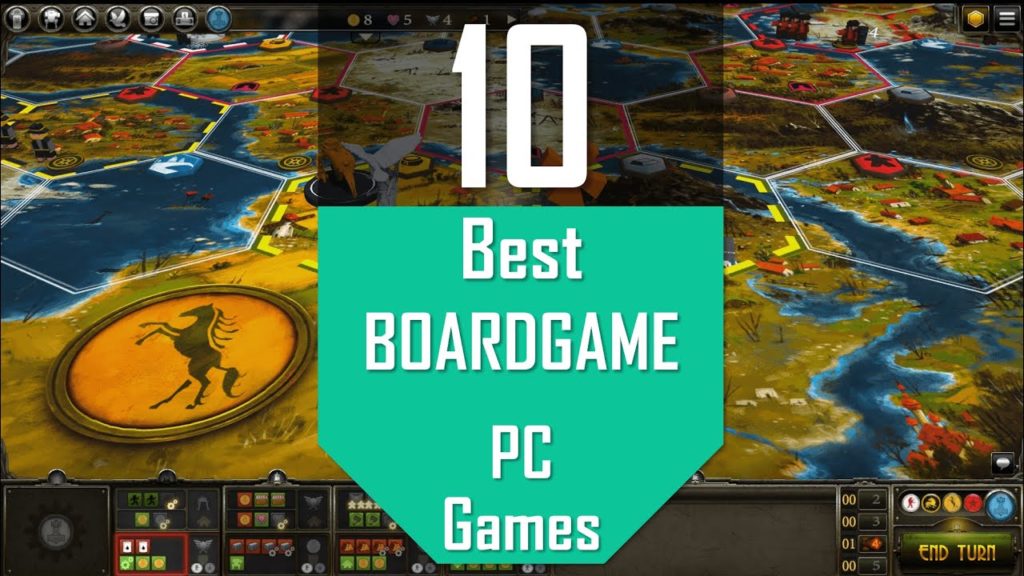 While digital board games aren’t quite the same as their tabletop counterparts, playing board games on mobile and PC can have major advantages over their cardboard cousins. After all, the social element of tabletop gaming is a major reason as to why people enjoy it so much. Board games in person are perfect for this, but digital board games can make enjoying the hobby that bit easier when a room full of people isn’t at your disposal. One big benefit that digital board games have over traditional tabletop games is that online functionality enables players to play board games online with friends regardless of location or circumstance.

A newer spin-off series is the Underworlds series set in the world of Warhammer - Age of Sigmar, which breaks down the tabletop games to small skirmishes between a few fighters. This series picks up on Warhammer Underworlds Online and transports this also competitively played system to the PC.

The game principle is simple: Two warring factions compete against each other on hex-based battlefields in turns. Before the game starts, battlefields are alternately determined, five mission objectives are set and finally the fighters are placed. The three rounds then proceed in several phases: Per round, both sides alternately activate a fighter and perform movement and combat action with him or draw unfavorable cards anew. Then both sides can play action cards alternately until both have passed. After that the next activation continues. A round consists of four activations per side, so one game consists of twelve own moves. The winner is the player who has more victory points at the end of the game, which are gained by mission objectives and eliminating opponents.

Gremlins, Inc. is a digital turn-based strategy board game developed by Lithuanian indie game studio Charlie Oscar and set in the steampunk world of Gremlins. Gremlins, Inc. is designed for up to 6 players in multiplayer or single player mode (with AI bots). Each player has 6 cards in his hand (which are replenished from the same deck) and plays them either to move around the board or to perform a series of different actions. There are many ways to interact with the other players, and duels are very different from 3 or 4-player games. You can play until a certain point limit is reached, or until a predetermined number of rounds is reached, or until a time limit expires. The game offers both individual and ranked games (including matchmaking according to rating).

Many of you may be familiar with The Settlers of Catan, which was published in 1995. The Catan Universe, which has just emerged from the Early Access phase, lets you play games of the well-known board game in simulated gaming table look. And you can play alone or in online multiplayer (both in the browser and via Steam), mobile versions are yet to follow. The developers are focusing on a free-to-play model: The basic board game and an introductory set of the card-based spin-off Catan - Das Duell are free of charge. For consumables, expansions, and certain features (such as targeted player searches), however, you will have to invest gold packages, which are currently offered for between 0.99 euros (equivalent to 100 gold) and 24.99 euros (equivalent to 3000 gold). Browser: Auf CatanUniverse.com finden Sie die offizielle Browser-Version. Hier treten Sie in Echtzeit gegen andere Spieler an. Auf der Seite brettspielewelt.de können Sie Die Siedler von Catan ebenfalls online spielen. Hierfür müssen Sie sich auf der Spiele-Seite kostenlos registrieren.

The comparatively slow dice roll lacks the dynamics of a modern video game, and the lack of thinking on the part of the opponents controlled by the game prevents thrilling duels: the weak AI makes Blood Bowl 2 the most difficult. The fact that it is still great fun is due to the stylish and well thought-out transmission of the tabletop original. The skills of the teams allow different tactics, coaches bribe the referee, even the weather influences the course of the game. An extensive campaign introduces beginners carefully to the world of dice and both the controls and the display of all moves now offer enough overview to make sensible decisions - unlike the previous version, I look forward to every kick-off! If you don't want to play online, you should think twice about getting started, because the weak AI often nips the tension in the bud. But if you lead your team into one of the online leagues and have enough time for every game, you can sink into Blood Bowl 2 for weeks.

Ticket to Ride is authentic and good implemented. The game principle is as motivating as ever and in the online mode you can play a game against friends and strangers from all over the world at any time - thanks to Vision Cam and headset support even in picture and sound. It's just a pity that interested tracklayers only have access to the original American scenario at the start, can't make any option or rule adjustments, and don't get any other offers beyond the board game template - hence no award. Even the presentation could hardly have been more minimalist. The developers from Catan or Carcassonne had shown considerably more commitment. Another pity is that there are usually only a few players on the global servers. Spontaneous games with four or five participants are therefore rather a rarity. Nevertheless, digital games are a lot of fun - even against AI opponents that can be adjusted in three levels. Those who like easily accessible, tactical board games will definitely not be disappointed and can already look forward to upcoming additional content such as Ticket to Ride Europe and Ticket to Ride 1910.

Scythe: Digital Edition remains true to the principles of the template. The digital adaptation of the tabletop board game Scythe by Stonemaier Games or Feuerland Spiele turns out to be an unagitated, profound tactical game with many possibilities of action, but sometimes no success. If you want to experience Scythe in all its glory, you have to be patient, make plans, and sometimes survive playful lean periods in order to realize game goals in comparatively quick succession - at the right time.

What distinguishes Scythe in the digital version are the comfort functions that can only be found in video games: Mouse-over hints for each game element, changes of view angle, automatic calculation of game successes and a helpful rewind function that allows you to rewind game moves - a single one or unlimited - on demand.

Nevertheless, as a player who likes the visual appeal of the board game, you don't really want to believe that the way the game is presented has already exhausted the maximum possible potential: the presentation of the animations seems too clumsy, the sound construct too monotonous, the elaboration of the board too uncharming.

Players who did not know Scythe before will find the digital version the perfect introduction to the complex tabletop. Scythe professionals at least have the opportunity to fine-tune their tactics or to play against other human opponents via online mode. Extensions will also be released for Scythe: Digital Edition, regular patches - which will also fix existing bugs - will be released anyway. This is also one of the big advantages of digital board games: They can be extended, adapted and improved quickly and easily. The digital adaptation of the successful strategic board game, which is available for PC-Steam, costs around 20 euros.

Pummel Party is an online and local multiplayer party game for 4-8 players. Beat up your friends or the AI with a variety of absurd items in board mode and destroy friendships in the unique collection of mini-games.
Violence, explosions, blood - that's the way it usually looks on Mario Party in front of the screens. Joke aside: His PC alternative Pummel Party does without the cute Nintendo filter in the game, but offers the same fun mix of fast action, funny mini-games and strained friendships.
And so it seems to strike a chord with everyone who feels a bit lonely at home, is looking for quick and easy online fun with their friends and can laugh about slapstick. Of the over 6,000 steam reviews for Pummel Party, 90 percent are positive. The game is currently listed there as a Steam-Topseller

In the new 3D edition of the popular classic board game, two to six players take on the role of founding fathers of the region that gave the game its name, build roads and abbeys or towns in asynchronous multiplayer games (...) Carcassonne is a modern, classic laying game based on the award-winning title in which players draw and place tiles with motifs from the south of France. The tiles can represent a city, a street, a monastery, a meadow, or a combination of these, and they must be placed next to tiles that have already been played, in such a way that cities are connected to cities, streets to streets, etc. Players can then consider placing one of their followers, called henchmen, on one of the areas: on the city as a knight, on the street as a robber, on a monastery as a monk, or on the meadow as a peasant. If an area is completed, the henchman scores points for its owner. Every game is a new experience thanks to the constantly changing landscape.

Armello is a really good digital board game. If you like it more comfortable and appreciate fairytale fantasy à la mouse and mysticism, you will experience atmospheric round robin tactics alone against the AI or online with friends. Due to the equipment, attributes, small quests and spells, a pleasant role-playing flair is created, but it is primarily about clever moves and card management in the style of classic tabletop adventures. Even if the zoomable map is a bit small, the animal heroes play quite similar, the world order varies too little in the long run and you miss a local multiplayer, the rules and regulations convince with clever combinations and interactions. Furthermore, the narrowness favors suspense, because in view of the many events and competing parties, there is always something going on in this high-quality presented hexagonal kingdom.

However, the players themselves must take care of the enforcement of the rules. Four of you play Monopoly over the Internet and three players go to the toilet at the same time? Then the fourth player can steal money from the bank just like in the real living room. You have found a realization of Magic the Gathering? Have fun with the rules, because there is no automatic that takes over the stack resolution for you. On the one hand, this is of course a bit cumbersome, that you still have to learn rules like a pleb in the 21st century, but on the other hand, it really gives online games a thick board game flair.

Besides the twenty games, there is also some DLC content. And besides the DLC content there is of course the Steam Workshop with, well, currently over 14,000 entries, including over 6,000 board games and 5,000 card games. All for free, because the workshop is free. The selection is gigantic. So far I have not found a board game I know of that is not there. Dozens of Monopoly versions (yes, even Pokémon), Axis and Allies, Cards Against Humanity and things I've never heard of in my life. Tabletop Simulator has a huge community that models characters, scans cards and provides all that.

You like Boardgame? Then maybe these Arcade PC Games are for you. Here are a list of TOP10 Fantasy / Arcade Sports Games for PC: